Black Power/Flower Power by Pirkle Jones and Ruth-Marion Baruch  contains photographs of both people involved and associated with the Black Panther Party and people connected to the Flower Power movement. Both groups’ ideologies contained similar ideas, skewing from the norm and talking about radical notions at the time such as equal rights and more personal freedom. The photographs document the movements on a larger scale, while also giving the viewer a look into what life was like for the individual involved in these movements. 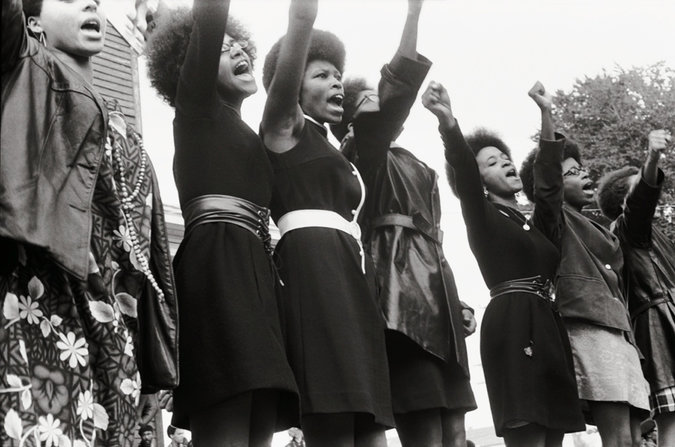 The Black Panther Party for Self-Defense, which was started by Bobby Seale and Huey Newton, was an organization that has been largely deemed criminal and violent by the majority of American society. This is not to say that the Party didn’t perform criminal acts, because they did, and a lot of their strategies were focused on violence, but these two aspects of the group should not solely define them. What is not often shown to the public is how much people involved with the group cared about what they were fighting for. What is also not usually shown is how much the Panthers and supporters of the Panthers cared about each other. The striking and beautiful black and white photographs taken by both Jones and Baruch do an incredible job of showing the softer side of a group with a very hard and tough exterior.

We think the main reason why the photographs are so successful in displaying a very clear message is because both artists were very clear while outlining their original intent before starting the project. To us, the first photograph shown in the book of the Panthers is an interesting and very intentional choice. The photo gives a very typical view of the Panthers. There are four members pictured, and their signature black berets, sunglasses, and leather jackets are shown. Their posture is stiff, and their faces show barely any emotion. When that first page is flipped, an image is shown that gives a completely contrasting view on members of the Party. It is a close-cropped, horizontal image of a young man and woman turned towards each other smiling. The man is wearing a “Free Huey” pin, which was a popular slogan among the Party members when one of their founders, Huey Newton, was imprisoned. The photograph is candid; the subjects appear completely natural and relaxed. The successive photographs delve into what being in the Party meant, both in a larger sense and in relation to the individual. One photograph that I think perfectly encapsulates what the photographers achieved through this body of work is shown on page 50. It appears to be taken at a Panther rally and the subject of the image is a male Panther member with a baby in his lap. The man is looking down at the baby with a concerned look on his face and a plate of food in his hand. What is interesting about this series is that the photographs illustrate a well-rounded view of the Panthers. All sides of the Panthers are shown; the kids, the women, the men and the surroundings are presenting in this series. The photographers are clearly trying to present the Black Panther Party in many ways, and the series ends with the 10-point Program written out. The 10-point Program was written by the main members of the Party and were the basic desires the Party wanted to fight for and accomplish. We thought this was a clever ending that would help verbally illustrate what the Party meant. 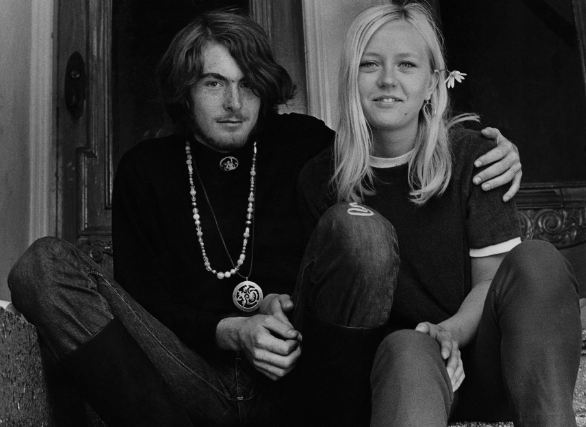 This book as a whole is very contrasting because the next section of the book is a series on “Flower Power”, or the “Hippie Movement”, which was occurring around the same time period as the Black Panther Party. The Hippie Movement lasted throughout the 1960s’ and 1970s’. It was centered around protesting the Vietnam War and Civil Rights. It received the name “Flower Power” because individuals in the movement used flowers to respond to violence instead of violence itself. In our opinion the Flower Power series is laid out similarly to the Panther series because both series’ have overview shots, detail shots and portraits. The main difference with the structure is that the Flower Power series has almost no children in it and instead has many animals in it. The majority of the subjects in this series seem to be young white adults and are portrayed as carefree. There are many photos that cover topics like love, recklessness and freedom. The people involved in the Hippie movement were mainly fighting against the Vietnam War through resisting the draft and protesting. There are photographs that illustrate these moments, for example on page 81, there is a candid shot of a truck driving by with people on it who have signs that show their resistance to the war. Most of the photographs though, unlike the Panther series, have to do with the daily life of the people involved in this movement. The Panther series had a lot more photos on protests and fighting, while the Flower Power series is mainly portraits and daily life moments of different individuals. One of my favorite photographs is on page 69. This photograph is of a young man and a young woman kissing on a motorcycle. This image is blown up to cover two pages, so it is larger than the rest. The composition is perfect because it focuses solely on the two individuals, creating an “in the moment” feeling. Another beautiful image is on page 58. It is the first image of the series, and shows a young woman in a white dress, barefoot, looking away from the camera and eating ice cream. This photograph is an interesting way to begin this series. This starting image allows the viewer to understand that the book is about to enter a completely different world. The beginning of the Panther series very intense while this image speaks relaxed and free. 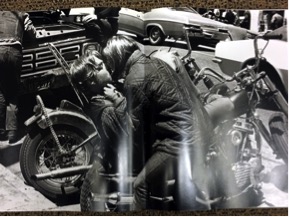 The Hippie movement did encounter violence and was involved in many protests, but this book mainly focuses on the individuals in moments of quietness. I wonder if this was intentional. The contrast between the Panther photos and the Flower Power photos is very apparent. The Panther photo series seems to show more sides to the Party while with the Flower Power series, not many sides are shown. I wonder if the photographers understood the under representation of the Black Panthers and intentionally chose to include more images about them instead of focusing on different aspect of the Hippie Movement. Also, the Black Panther movement was a movement for African Americans, while the Flower Power movement was predominantly White. Both movements occured during the same time period, yet the stories that the photographs tell are so different.

Library in New York, dedicated to the art of photobooks. View all posts by ICP Library