The WRRQ Collective: A Sensibility

This spring, the ICP Library launched a collaborative exhibition series co-curated with Be Oakley of the GenderFail Archive. In addition to organizing a variety of curatorial perspectives to investigate gender through archives, Oakley invited participating artists Hallie McNeill, Evan Galbicka, and Colin Klockner to reimagine how printed media can experienced experienced in mobile reading rooms. Each artist has produced a sculptural display: McNeill’s Untitled book stand is functionally minimal and requires us to be at multiple heights to view its books; Galbicka’s GenderFail Archive Seat are resin sculptures that double as floor seating and shelving; Klockner’s Forum is an architectural model showing the most common form for how architecture has assembled bodies in search of information. 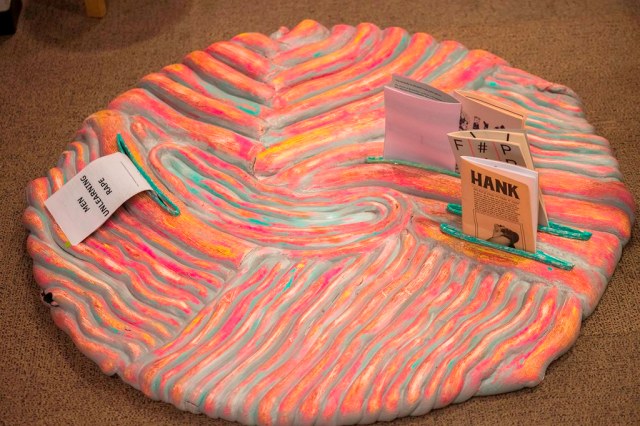 For the first installment of the series, Oakley assembled a selection of books and printed ephemera from the GenderFail collection as well as the ICP Library’s holdings. Four members of the WRRQ Collective arranged the first installment for the library windows: Darnell Davis, Pheral Lamb, Marcela Ossio, Quito Ziegler. What follows is a casual conversation with three members of WRRQ, completed in March 2018.

Patricia Silva: Quito, will you introduce the WRRQ Collective and how it functions as a group?

Quito Ziegler: WRRQ is an intergenerational network of queer/trans artists, cooks and activists. We came together through an annual summer retreat, now in its 6th year, linking queer artists with young people dealing with homelessness and transience. We have grown into a year-round family and our WRRQ continually evolves as a creative response to community needs. Depending on the project, there are 5 to 50 collective members working together.

All of us understand that our liberation is interconnected, and WRRQ hard to relate to each other across our differences. We make art for visual resistance and collective healing, including visual art, poetry, music, drag, video and culinary arts. We also take care of each other and our people by organizing community dinners, clothing swaps, vigils and street actions. 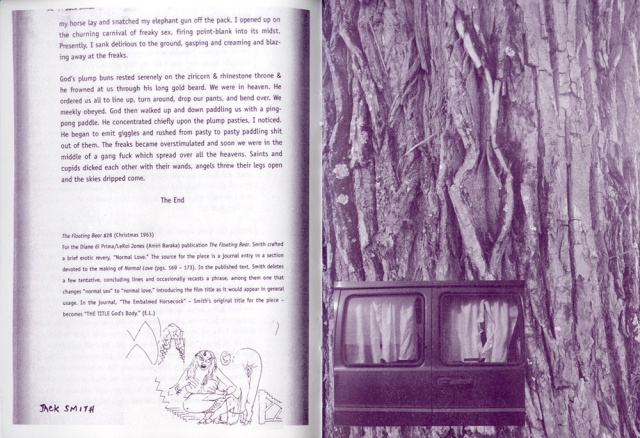 Patricia: How did the selections for the ICP Library window come about, for each of you? Quito mentioned earlier that you all worked intuitively, so how was that process?

Darnell Davis: We wanted positivity, an escape from the sad news of the world like a sigh of relief or a breath of fresh air. We just looked around and found things that made us happy and evoked that feeling of freedom and resistance that called out to us. I literally turned my mind off for a bit and just picked out images that sparked a positive feeling within me. Whether it was a beautiful brown face, a powerful uplifting image, maybe an image that was a little out there and sexually liberating, and even vibrant colors that put a smile on my face. 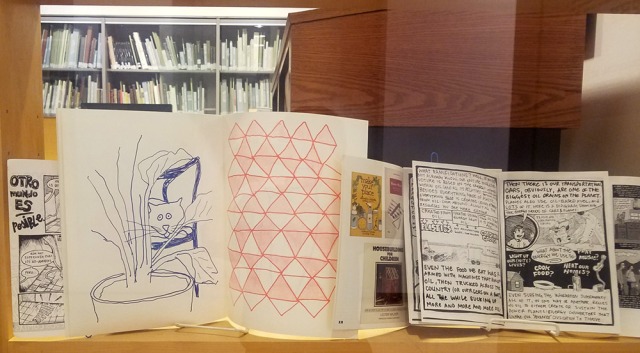 There wasn’t much talking which can be oddly surprising but, I guess that is due to the fact of us being a family of queers knowing each other well enough. When we all were smiling we knew we were doing the job we came to do which was to have these visuals become eye-catchers and lure people in to see the queer archive on display and not hiding or being on one row of a bookshelf. We created what we embody as a collective of diverse people with the commonality of being queer.

Patricia: Is this the first time that WRRQ Collective has done a ‘queering the archive’ type of project?

Quito: Kristen P. Lovell and I, two of the co-founders of WRRQ, have both been obsessed with queering archives for years. Kristen has produced at least four “Trans in Media” videos that show how black trans people are portrayed in the media versus how they portray themselves. My long-term search for images of nonbinary people and grappling with our historical invisibility made its way onto ICP’s walls last year in the Gender section of Perpetual Revolution, among other curatorial projects.

As trans movements grew and our stories became more known, Kristen and I have both starting moving away from strictly historic work, and are both into producing original films that put images of trans people we can relate to into the world.

Patricia: What does queering an archive mean to you, Marcela and Darnell?

Marcela: Showing different aspects of queer expression and community through a variety of artistic mediums.

Darnell: To me, it means putting queer books to the forefront like bolden texts making articles easier to find and harder to miss. I really enjoyed working with my collective family in making queer materials easier to find and out there for others to enjoy. One thing that always upsets me is to walk into a library and the queer section is either hard to find, one row on a bookshelf (ok, in some places it’s two rows), or non-existent.

Patricia: What sparked individual interest in the images that you chose and wanted to arrange for the windows?

Darnell: Happiness, Vibrant and Saturated Colors, Positive Message, Sexual Liberation, Beautiful Brown People, Strength, Power, Resistance. I chose images that I felt as human beings we need to acknowledge that we live in a diverse world where all shades and backgrounds of people exist. Our images need to reflect that diversity especially within a queer archive. I felt it was my duty to inject black and brown faces in there to dismantle the idea of the word queer and having the first thing in your head [for an image of queerness] be a white person. Instead I want the first thing to be seen with the relation to the word queer is an abundance of flowers. Not just one flower, but a whole field of wildflowers.

Marcela: The selections I made were works that popped out at me that were either by people of color or displayed the strength, power and beauty of people of color.

Patricia: How did you think of approaching this queer archiving project, knowing what our current political climate is?

Quito: The week before we curated our windows, a #MeToo moment happened in our lives, and I initially wanted to use the windows to rage against patriarchy and create space for others to air out their feelings. When we actually sat down to dream together, Darnell and Marcela convinced me that rage was not as fierce as love, and we’d do better by displaying positive images of strength.

Marcela: That was the initial idea, to do a Graveyard for the Patriarchy. I believe that with everything that’s been going on lately, it would be better to do something that would showcase works of art that are more positive rather than further giving a platform to negativity.

Darnell: When we were discussing how we felt about “throwing” books into the graveyard, things began to feel a bit depressing for me. I internally felt like this was another way of burning books and I did not feel like that was something I wanted to be apart of. So instead Marcela voiced what I was internally thinking and we all agreed that we should shift the vision from the graveyard and into focusing more on positive and self-affirming imagery. I thought it was especially necessary during a time where our country’s stance in the world is so depressing.

Patricia: Your arrangements are organized according to a sensibility rather than media-specific visual forms. I see this as a reflection of the WRRQ Collective’s own energy, and what holds you all to each other, do you agree?

Darnell: We are all a great mix of people with different backgrounds and talents merging together. Everything we do is a form of mixed media so you are right about that one. Our visuals are like wild ponies in a field of wildflowers!

Marcela: I would say that it is close to a reflection of the WRRQ collective because of the diversity of the images we chose, and how they came together so well to describe different ideas we were trying to display.

Patricia: From what you were drawn to in the ICP Library, what was most enjoyable to discover?

Marcela: I really liked discovering a lot of the work we displayed. These works are things I hadn’t come across before and it was very empowering.

Patricia's interviews and critical writings on photography and visual culture have been published by the Joan Mitchell Foundation; ICP Perspectives; Cult Bytes; Dodge & Burn: Decolonizing Photography; Daylight; "Memories Can't Wait;" and in The Portuguese American Journal. Patricia's photographs and videos have been internationally exhibited and screened at numerous institutions.
View all posts by patriciasilva →
This entry was posted in Uncategorized. Bookmark the permalink.

1 Response to The WRRQ Collective: A Sensibility