Blood and Champagne – an interview with Alex Kershaw

In 2002 Alex Kershaw published a biography of Robert Capa Blood and Champagne.  It is a Robert Capa biography that explores not only the career of a heroic photojournalist, but also the other side of the man: The drinking, the womanizing and the gambling. Kershaw is not an art historian or a photo historian. He is a journalist and he approaches the subject of Robert Capa as a fellow journalist would. It is a Capa biography that as Alex puts himself:  “Was intended as an homage to a fantastic character and wonderful artist. But not hagiography”.  It is a biography about the Robert Capa who continually reinvented himself in the bath every morning. Capa reinvented himself so that he may best be able to survive all the horrors that he witnessed.

AK: I was features writer and worked with good photographers and they all adored Capa. My wife loved his work and showed me many images. His story is hard to beat – very romantic and exciting and important.

MC: Which do you prefer Robert or Bob?

AK: Bob – it’s what the other hacks on the line called him when people started to shit their pants and shells started flying. Then you kept your head to the dirt and followed his orders – he could keep you alive.

MC: Was there anyone to your knowledge who ever called him Andre?

AK: His mother and brother – when they were together eating Borscht. And Gerda of course before she was killed. Cartier-Bresson also knew him as Andre and made a point, he told me, of calling Capa by his real name. He knew the real Capa – and loved him like a brother.

MC:  How long did it take you to write and research the book? What do you remember from the researching your book?

AK:  Took five years. I remember making some great friends – people who knew Capa and had great fun with him.

MC: In conducting your research with which individuals were your most memorable encounters and interviews?

AK: Inge Morath – left me in tears later. She loved him like others for his generosity and charm and faith in her.
Slim Aarons was great fun, very witty, told great stories of poker games with Capa.
John Morris was trying to persuade me that Capa wasn’t angry about the spoilt shots.
Warren Trabant told stories about getting drunk and laid in Paris with Capa.
Bettina Graziani in Paris, a beautiful model, in a palace that the Aga Khan had bought for her, talking of the special Capa.
Pierre Gassmann smoking and drinking talking about Capa saying it was not fun to do his job sometimes and how he crapped himself jumping into Germany.
George Silk – great guy
Ben Bradlee – very funny man….
Eva Besnyo in Amsterdam, talking about her teenage pal
Irene Spiegel on Gerda’s death ….

On and on and on.  Most of them have gone now. I was very lucky to meet many of the greats…

MC: What was it like to interview Cornell Capa?

AK: He refused. We got on okay via mail but then [a person at the ICP] soured our relationship by saying ‘me or him’. 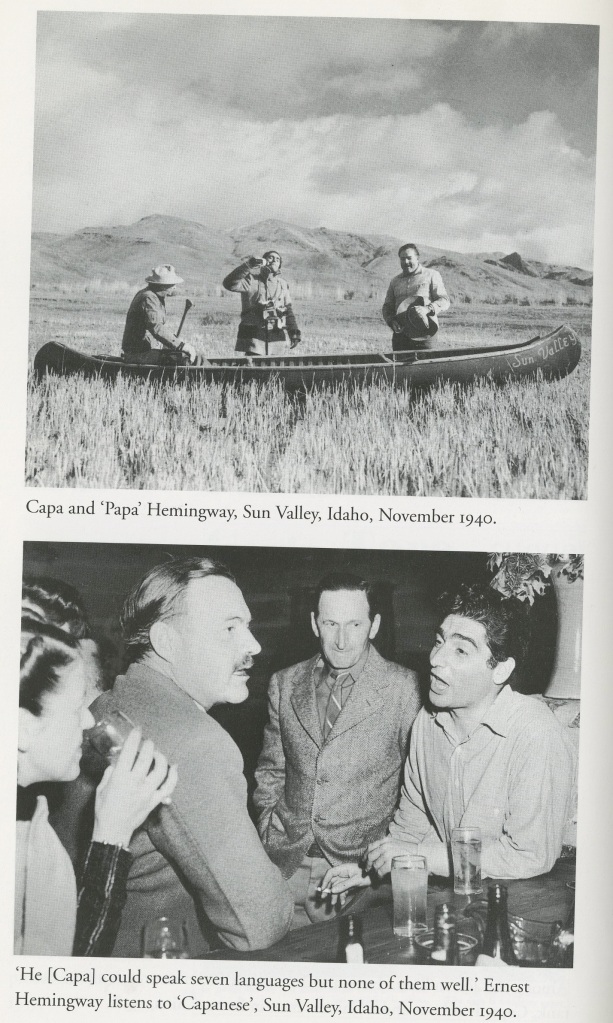 MC: What was really juicy about your book was the considerable number of interviews that you conducted.

AK: Nothing “juicy” really, but I think I managed to convey the troubled side, the gambling etc. and got close to the real Capa that Suzi Marquis and so many others adored.   And they all talked to me – even when they’d been told not to by Magnum and Cornell….Funny that they ignored the orders of censure….! They resented not talking to a fellow journalist about someone they respected and who had disappeared into dull hagiography…..

MC: What didn’t make the cut? Are there any outtakes?

AK: Not that I remember. It all went in. I had no censor. But I had many long interviews with very cool people who talked about not just Capa…..

MC: Anything that you would like to share that seems more pertinent now than when the book came out?

AK: [Some scholars] did a big disservice to Bob Capa by trying to make him look like a humanist saint and by being far too defensive about the Falling Soldier. They should have said – so what? Big deal. But they just made the issue bigger than it merited. Capa was a refugee, a hustler and a soldier.  And he was there when it mattered  – a fantastic journalist. The best of his generation with a camera. But he hated war, and his tragedy is that he could not escape it.

MC: It seems that many folks are obsessed with the idea about the famous war photograph The Falling Soldier being a staged image but does it really matter if it was staged or not?

AK: No – not to me. Snappers set up shots all the time. D Day was real enough!

MC: What was it about the character of Robert Capa that made him so extraordinary?

AK: Great humor and sensitivity and bravery and intensity – he brought a great deal of joy into people’s lives because he lived so passionately and with great style.

MC: There are so many wild and interesting ‘facts’ about Robert Capa it is hard to think that they are true. Did he really have six fingers on one hand?

AK: According to Cornell Capa, yes.
[note – Robert Capa was born with six fingers on one hand and this was corrected in an operation when he was a child]

MC: Did he truly coin the term Generation X?

AK: Yes in collaboration though with others.

MC: Was he really the person who introduced Hemmingway to Steinbeck?

AK: Yes and it backfired – the two hated each other.

MC: Yes, I have read about the Hemingway and Steinbeck meeting in your book. What I find extraordinary is not that these two hated each other – it seems likely that they would – but that Robert managed to get along so well with both of them. How much of a charming chameleon was Robert Capa do you think?

AK: All good journalists, especially press photographers, have to be charming. Artists calling themselves photographers don’t have to fund the next poker game by getting a shot on the cover of Life magazine. There seems to be such an obvious chasm in the understanding of how snappers like Capa worked – he made money from being with Papa and celebrities. So he was charming. But he was no fraud. Inge Morath told me he was genuinely wonderful company – he was funny, witty, and very elegant. A great player as Cartier Bresson told me. We all play roles at times – Capa’s was a great one.

MC: How do you feel about the factual inconsistencies in the writing of Robert Capa’s memoir/autobiography Slightly Out of Focus?  It is scripted like a war movie in many ways but I feel that that personal myth making is highly revealing in many ways. What do you think about his memoir and also the other writings about Robert Capa and his life?

AK: Loved his memoir – his voice is there. And it was going to be a movie so he served up a good tale – but most if it is true and at the time the real horror of war was not palatable.

MC: One thing about Robert Capa is that he certainly packed a lot of living into a very short life (he died at 40 years old).  Had he not died so very young how do you think the rest of his life might have progressed?  Do you have any thoughts from your research on where is future might have been heading?

AK:  He would have maybe gone into TV but I think he was always a photographer – a wanderer. He would have been like Cartier Bresson perhaps – a nomad.

MC: I’d like to know more about Capa’s sense of belonging – especially towards the end of his short life – did he feel he belonged anywhere whether that meant place or nationality. Was he a New Yorker? Or was he too European for that?

AK:  He hated New York most of the time – not civilized enough, too much about money [now it really is] and little real elegance in the rituals of life. Liked American women a lot though….  Paris was his home, where he felt comfortable, where he loved and lived at his happiest.

MC: Regarding his photographs – when did he feel he had done his photos.

AK: He never said. He died before they started turning him into a genius etc. etc…. He was a modest guy about his shots, always joking, self-effacing – not like the pompous artists you find today trying to explain why an out of focus baldy composed shot of nothing happening matters. He was technically poor, never got the hang of artificial lighting. He didn’t think of himself in grandiose terms. He was hustling the next job… But Capa knew he was celebrated, and he enjoyed being talked about. He had earnt respect of Bergman etc…..He was there at the biggest moments of his time. No motor drive, no flash, no endless reams of film and assistants – just a Contax and the knowledge that with a 50mm lens you had to get close – which is why true combat snappers adore his work.

MC: His photos were developed, printed, etc by others – did he feel ownership about how they were used or were they out there, after the fact of his having taken them?

AK: Yes, he founded magnum to deal with the copyright issue. He wanted photographers to be empowered. Ownership was a \huge issue.  Life had all his greatest money-spinning shots from the war! They captioned his images – he really didn’t provide them….He was furious about the Life explanation of his blurred images. John Morris owed him big time and paid back with Ladies Home Journal fee for Soviet story  – to his credit.

MC: Do you have any plans to ever write about any other photographer?

AK: No, no-one reads books on snappers. I wrote about Capa because I was at the time very much in his world, working in reportage and closely with great photographer/friends – I loved his work, still adore it more and more, and see all the beauty and pain and care and class the man had when he recorded the immense suffering and bravery of ordinary people in the crosshairs of history. I hope people feel the emotion and spirit in the book. He touched my life profoundly….in many ways….

Bob Capa was one of those very interesting people in history. He is credited with creating the term “generation X”. He is the man who introduced Steinbeck and Hemmingway to each other. He was a socialist and political activist. He was allegedly the photographer from rear window. He hung out with Burl Ives. He was beaten, jailed and then thrown out of Hungary. He was chased out of Vienna, Berlin and Paris. He took the famous first pictures of d-day. He founded the Magnum photo agency.  He died at forty. There are many things that can be said about Robert Capa. His influence continues to be felt. He continues to be an inspiration for many young photographers. He continues to be the reason why many young people choose to become photographers. He was born 100 years ago.

A great photo novella which is a tribute to the inspiration that was Capa.

Alex Kershaw is the author of the widely acclaimed best sellers The Bedford Boys, The Longest Winter, The Few, Escape from the Deep, The Envoy and The Liberator.
http://www.alexkershaw.com/ 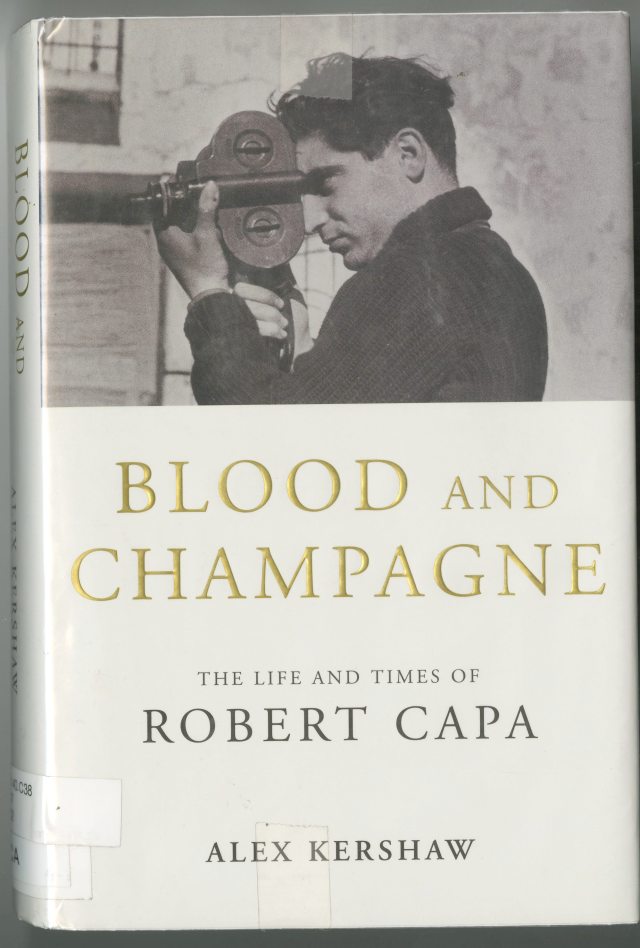 Head Librarian & Archivist at the International Center of Photography
View all posts by matthew carson →
This entry was posted in International, Interviews, Unpacking the collection and tagged Alex Kershaw, Matthew Carson, Robert Capa. Bookmark the permalink.

1 Response to Blood and Champagne – an interview with Alex Kershaw