“Good friends make you face the truth
about yourself and you do the same for
them, as painful, or as pleasurable, as
the truth may be.”

This paragraph is on the back of Corinne Day’s autobiographical photo book Diary.

I first opened Corinne Day’s Diary 12 years ago. Fittingly it was a gift from a new friend in my first year of Art College. The body of work means a lot to me, firstly, because it was the only photography book I owned at that point. And secondly it set the tone of a new friendship. We embarked on a different kind of relationship than I had with my old, comfortable school friends. She was someone who I could embrace the darker side of my personality with, say anything, do anything, be myself and not be judged.

This, is the essence of Corinne Day’s Diary.

The book is a collection of photographs spanning ten years of Corinne Day’s life. You’ve got some shockers in there from bloody knickers on the floor of an apartment to a nice looking guy in a cozy cardigan shooting up. You have Day herself smoking heroin and touching herself in bed and it goes on. When I attended the exhibition of this book at the Photographers Gallery in London (2000), I remembered hearing more than one person being disgusted, and laughing uncomfortably at the contents of her day-to-day life being so public. (Probably not Larry Clark or Nan Goldin fans!) Though now being older, I can understand better that kind of reaction, at the time, being only 20 and Day being my heroine, I was defensive. I felt frustrated that they did not manage to see the beauty and honesty in this story and could not understand the depth of the friendships that were being shown to them. Through all the photographs of naked boys and girls, lines of ketamine being racked up, dirty squats, bad tattoos and people having sex, is a gorgeous story of Corinne Day, her life and her friends during the 1990’s in London.

Tara seems to be Day’s best friend and some of the photographs of her are really heart wrenching. I think it’s the 3rd photograph into the book entitled “tara crying at home stoknewington 1999” that really gets me. She’s looking straight on into the camera smoking a rollup and everything about her face tells you she’s probably only on a two-second break from launching back into sobs, about what, we don’t know. 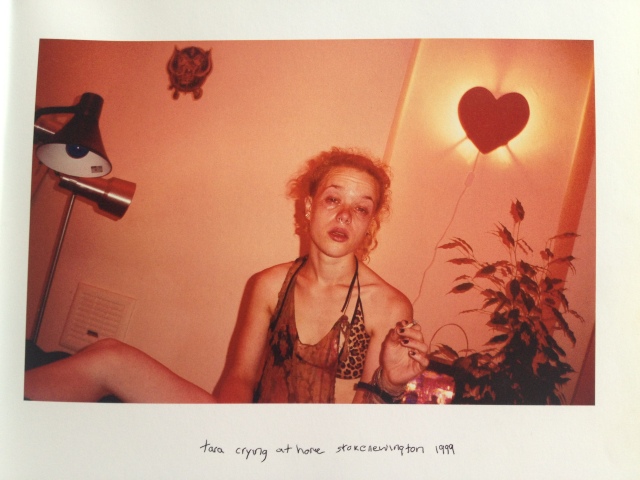 Later on in the book we see another photo of her hysterical, her hands are midway through that despairing shaking that happens only when you are uncontrollably sobbing your heart out. Then, to counter these photos, you see Tara doing things like emptying the baby pool looking all purposeful and busy, on a holiday in Wales laughing on the floor decorated in Christmas tinsel, and a favorite of mine, covered in mud in the garden smiling having a smoke. They all have a kind of homely quality to them. Due to the way in which you are introduced to Tara, you may find that these photos genuinely make you smile for her, which gives you an inkling of how pulled into these peoples’ lives you suddenly find yourself.

Day goes on to show us other aspects of her life than just Tara. Her Nan’s 84th birthday, friends like Andy, Bow, Georgina, Vinca, Tania, Yank amongst lots more. You are given clues to their personalities and start to form opinions about who you like and maybe dislike and maybe (if you are a 20 year old art student) who you would want to hang out with. Day used to be a model and we see some of her friends who are in the same industry, like Georgina Cooper (below), who went on to have a successful modeling career.

We meet Day’s boyfriend Mark and see they live on Brewer street in London’s Soho, a seedy yet upcoming, very central area of London. This gives a nod to the fact that Day was already a successful fashion photographer, who had been the person to bring Kate Moss into the world of modeling. Day also had shot for Vogue though, apart from the Brewer street address, you wouldn’t guess these facts.

Halfway through the book you get slapped in the face with an image of Day sitting on a bed picking her nails and trying not to cry, the title is “Me after the doctor told me I had a brain tumor Bellvue Hospital New York 1996”.

This image stops you in your tracks and you heart sinks but as you go on, you see her go down for surgery, recovering, being visited in hospital by her family, Mark and Tara. You feel genuinely relieved that your storyteller is ok and carry on. More photos of Tara and her baby, Andy dancing and holding a rifle, Bow having sex, Tania dyeing her hair and Yank trying on high heel shoes. Then the end. Then you miss everyone and have to open it up and start again.

Like I mentioned previously, the beauty of this book is the strength of the friendships that you are privileged to be witnessing. You end up with a strong investment in the characters and wonder what they might be doing now. I’ve been enjoying this book for nearly 13 years and have never gotten bored, it is really one of the best presents I have ever been given. I can imagine that the glamorization of the world of drugs might dull these photos for some. But be patient when looking, as they are more than a load of 20-somethings getting high and having sex. Bare in mind, her photographs of Kate Moss almost naked in a dingy apartment in the early 1990’s were printed in The Face magazine and it’s been said they sparked the Heroin Chic trend in the UK. With Diary she’s giving us her inspirations and her passions to mull over. Who wouldn’t be interested in what could essentially be an artist’s sketchbook? Day is giving us a gem.

In 2010 the photographer’s brain tumor claimed her life. Diary is a memento for those of us inspired by her unique eye.

Leanne Benson is a young British photographer, who has just returned from living in NYC for 18 months where she was developing her portfolio and interning at various places, including at ICP. Now back in London, she is working as a freelance photographer. Documentary and environmental portraiture are her favourite types of photography to shoot and to admire. Her blog is here:  http://binskyphotography.tumblr.com/

Library in New York, dedicated to the art of photobooks.
View all posts by icplibrary →
This entry was posted in Intern posts, International, Unpacking the collection and tagged Corinne Day, Leanne Benson. Bookmark the permalink.

2 Responses to Diary by Corinne Day – review by Leanne Benson.