A quick search of the International Center of Photography Library’s online catalogue using the keyword “Delpire” reveals 26 entries. Another search using “Photo Poche” reveals 34 entries. The frequency with which these two terms appear in the catalogue’s database only hints at the influence that curator, editor and publisher Robert Delpire has had on photography and photobooks over the past 60 years. As the visionary founder of the French publishing venture Delpire & Co. and former Director of the National Center of Photography in Paris, Delpire has been responsible for how many people interact with photography. His highly developed sense of graphic design in tandem with an eye for the most important figures in western photography has enabled Delpire to envision and publish photoboks that straddle both the high and low ends of the market. Delpire & Co, an exhibition currently on view at 4 New York City venues, including the Aperture Foundation Gallery and the Gallery at Hermès, provides an in-depth survey of his most famous books, magazine/editorial projects, and curatorial endeavors. Fortunately, for the ICP community, further study of many of his best known photobooks can be conducted at the ICP Library. In total, there are 60 books in the ICP Library collection that bare Delpire’s imprint.

What is so nice about the books published by Delpire is the range of titles offered – there is a clear sense that one of the primary tasks of Delpire & Co. has always been to make the most important photographers and their photography accessible to all. According to the Aperture Gallery press materials, Delpire never intended to become a book publisher. Rather, he began his studies as a medical student, where he found himself in charge of the school’s semi-annual bulletin Neuf. His ability to bring together the best writers, illustrators and photographers quickly made him realize that he was better suited for publishing than medicine. In the mid-1950s he formed Editions Delpire and began publishing books by Henri Carier-Bresson, Lartigue, Brassaï, Doisneau and Frank.

A pristine copy of one of Delpire’s most famous early publications, Robert Frank’s Les Américans (1958), can be found in the rare book section of the ICP Library. Donated by an ICP Library Committee member, this seminal publication, which resulted from Frank’s 1955 road trip across the United States, is significant for a photographic approach that unflinchingly looks at all strata of American society. Distinct from the American version, which was published a year later by Grove Press with an introduction by Jack Kerouac, the original French edition by Delpire reinforces the social documentary nature of Frank’s images by accompanying them with texts by well-known writers of the period, including William Faulkner, Henry Miller, John Steinbeck and Simone de Beauvoir. In the Aperture Gallery exhibition, Les Américans (1958) is presented as a closed book on the wall in a thick plexi-box with 3 framed photographs surrounding it. This is also the case for several of the other classic and more valuable books on view at the gallery, which include William Klein’s Tokyo (1964) and Henri Cartier-Bresson’s Obvious Offenses (1968). An attempt to give a sense of sequencing and the images within several of the early books is provided in display cases, which show the closed books with additional copies of the same editions open to reveal 2 to 3 double-page spreads. Although still not as ideal as holding the books themselves, this presentation method does give a better sense of the tactile and narrative nature of the books on view. Highlights in the cases include Henri Cartier-Bresson’s Les Danses à Bali (1954) and D’une Chine à l’Autre / From One China to the Other (1956), Robert Doisneau’s Les Parisiens Tes qu’ils sont (1954), and George Rodger’s Les Village des Noubes (1955).

Completely aware that many older photobooks are too fragile to be over-handled, I regularly ponder the question as to how they should be presented. With more and more photobook exhibitions being curated over the past 5 years, and vitrines and plexi cases often a poor presentation method, I look forward to someone coming up with a more satisfying solution to this issue. Fortunately, this is the not a concern for many of the recent monographs on view at both the Aperture Gallery and the Gallery at Hermès. Most are extremely accessible, presented on wall-mounted shelves that allow visitors to turn pages and experience the tactility of the books. Highlights of recently published monographs on view in the Delpire & Co multi-venue exhibition and in the ICP Library collection include:  Josef Koudelka’s Chaos (1999), Koudelka (2006), Henri Cartier-Bresson: Photographer (1979), and Jehsong Baek’s Là ou Ailleurs (2006). 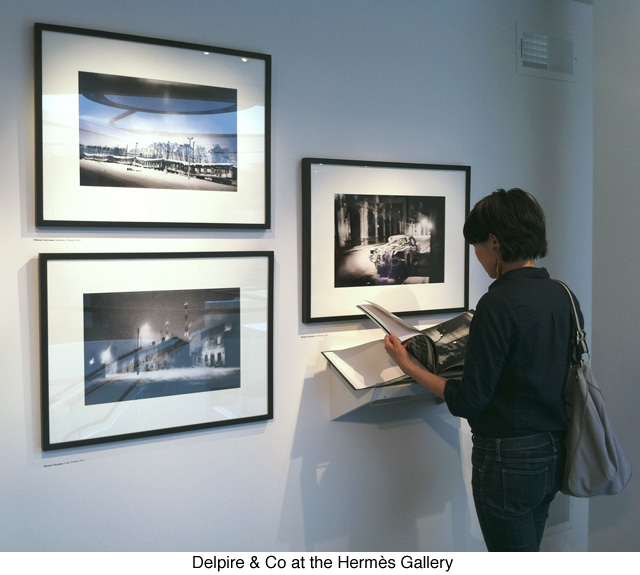 Also noteworthy for their capacity to translate Delpire’s democratic publishing ethos is a well-respected series of numerically sequenced softcover books on important photographers and photographic themes entitled Photo Poche (now published by Actes Sud). Initiated during Delpire’s 1982 – 1996 tenure as Director of the National Center of Photography, these compact, yet highly informative and attractively produced volumes provide a wonderful introduction to many of the “greatest hits” of photography. I have to admit that much of my early photography education began with the Photo Poche series. They are easily portable and fit nicely in a school backpack. I remember hours slipping away as I pored over the mostly black and white classic images in Jacques Henri Lartigue (#3) and Robert Doisneu (#5). It didn’t matter that my French was pitiful, because the images are the central focus of these books. So it came as a nice surprise that I could relive a bit of my early photography research during my recent visit to the Aperture Gallery venue, where they have floor to ceiling open shelves with many of the nearly 200 Photo Poche books on display.

Over the years, Robert Delpire has received many honors for his publishing, curatorial and editing work, including the International Center of Photography’s Infinity Award for Publication in 1985, and Lifetime Achievement Award in 1997. As a visionary figure in the field of photography and photobooks, Delpire’s work is remarkable for the mind-boggling depth of his contribution. I doubt even the most modest photobook collection or library is without a volume published by Delpire or Photo Poche. His spot-on eye for photography and design has shaped the way many view photography and the photobook.

Russet Lederman is a media artist, writer and photobook collector who lives in New York City. She teaches art writing at the School of Visual Arts in New York and writes on photobooks for print and online journals, including Foam, The Eyes, IMA, Aperture and the International Center of Photography’s library blog. She is a co-founder of the 10x10 Photobooks project, lectures internationally on photobooks, and has received awards and grants from Prix Ars Electronica and the Smithsonian American Art Museum.
View all posts by Russet Lederman →
This entry was posted in Exhibitions, International, Seen and heard, Unpacking the collection, Visual Research and tagged Aperture Gallery, delpire & co., Gallery at Hèrmes, George Rodger, Henri Cartier-Bresson, Jehsong Baek, Josef Koudelka, Les Américains, Neuf Magazine, Photo Poche, Robert Delpire, Robert Frank, Russet Lederman, William Klein. Bookmark the permalink.