Earlier this year the International Center of Photography’s Library received a generous donation of several books by Dutch photographer, curator and bookmaker Machiel Botman and his New York gallerist Tom Gitterman. In addition to the beautiful monographs of Botman’s highly personal and emotional work was a 2008 retrospective catalogue for Kiyoshi Suzuki: Soul and Soul: 1969-1999, a show that Botman guest curated at the Noorderlict Photogallery in Groningen, The Netherlands. Marginally known in the west at the time of this Dutch retrospective, Japanese photographer Kiyoshi Suzuki, who died in 2000 at the age of 57, is often grouped as a member of the postwar Kompora (contemporary) photography movement. Upon the closer inspection afforded by Botman’s exceptionally well-conceived show and catalogue, Suzuki proves to be a refreshingly unique and multi-layered photographer who defies such an easy classification. With an unflinching commitment to a distinctly personal cinematic visual aesthetic, Suzuki who supported his art and family through his job as a commercial sign painter and photography teacher at the Tokyo College of Photography, is all about time. But not a time that mimics film, rather a time that takes film as a jumping board as it mines a space distinctive to photography and its considered placement in the sequencing of a photobook. Influenced by his longtime friend, American photographer and filmmaker Robert Frank, Suzuki is a master of “process” and the unfolding of a slow and expanded narrativity grounded both in the real and the dream-like. As Botman’s respective catalogue so beautifully illustrates, it is the path traveled as much as the end result that shapes Suzuki’s thoughtful balance of word and image in the eight mostly self-published books he produced between 1972 and 1998. 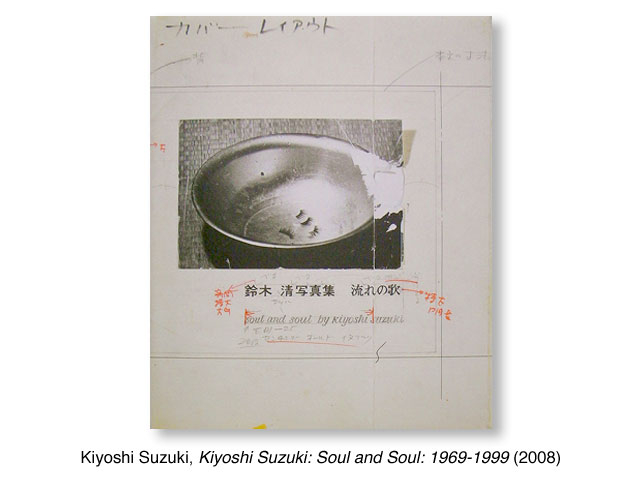 Bookmaking played a central role in Kiyoshi Suzuki’s development as a photographer. To say that his photography is “mostly about the book” is not a light generalization. The process of conceiving a book – determining scale and design, sequencing the images, and deciding if and how to include text — inspired and shaped Suzuki’s entire photographic approach. In the booklet that accompanies Kiyoshi Suzuki: Soul and Soul: 1969-1999, Yoko Suzuki, his widow recounts an anecdote of her husband always carrying around his book dummies, along with a knife and extra paper in his camera bag. She tells how he would enjoy a glass of beer as he sat with an in-progress book dummy open on the living room table. He would also pull out his book dummies for all the neighborhood merchants as a way to engage in a dialogue and solicit feedback on the books’ evolving design and content.  After his death, Yoko visited the local cake shop and tells how the baker vividly remembered looking forward to Suzuki’s book dummies as a way to see a world beyond his shop doors. It is this ability to imbue his books with a very personal and intimate view of the world that speaks to Suzuki’s unique narrative approach – one that emphasizes a universally shared consciousness at the intersection of reality and the unknown – and his dedication to the “objectness” of his books.

With the acknowledgement that the book dummies are an essential component to understanding Suzuki as a photographer, Botman fills the Noorderlicht catalogue with reproductions from the seven dummies for Suzuki’s self-published books. Not included is Ship of Fools (1991), which is his only book to be published by IPC, a commercial publisher. The sense of his working process is palpable as the catalogue unfolds visually, without the distraction of text. (Essays are found in an accompanying booklet.) Starting and ending with his first book, Soul and Soul / Nagare No Uta (1972), the catalogue pages reveal Suzuki’s evolution as a photographer and bookmaker. Crop marks, measurements, and editorial notations fill the margins and shed light on Suzuki’s creative decisions and thought process. Through taped additions, soiled pages, and the layering of ideas, each book is slowly revealed.
Soul and Soul pays homage to his childhood home, Iwaki City in Fukushima prefecture. There is a quiet sense of place, both past and present, in the book’s 4 chapters. Unencumbered by text, Suzuki’s images expose the daily lives of the local miners, summer amusements, traveling kabuki actors, and after hour bars and clubs. The Light that has Lighted the World / Brahman No Hikari (1976), his second self-published book, for the most part continues the quiet, and rather minimal design approach initiated in Soul and Soul. Although text is included in the form of captions on the empty left-hand pages, which sit opposite mysterious and dramatic photographs of Hindu spirituality shot in India. The integration of textual elements as a strong design consideration is introduced with Mind Games / Tenmaku No Machi (1982), his third book. The black and white images in this book feel like a bizarre Japanese road trip peopled by circus performers and drifters.  Wrapped in a silver printed rice paper dust-jacket, Mind Games showcases Suzuki’s masterful typographic design sensibility. Images are presented on several pages as either full bleeds or a collage; text anchors the back section as it spreads across several ochre pages; and a gate-folded insert foreshadows the future color work of his next book, S Street Shuffle / Yume No Hashiri (1988), as it combines text with four-color images.
From this point forward in Suzuki’s photo-bookmaking, the placement of text and the choice of paper break free from traditional design constraints.  There is a sense of freedom and experimentation: text is cut out and presented as a saved newspaper clipping, images are cropped, and film sprocket holes exposed. Dust-jackets are beautiful textured papers layered with exotic designs that are intentionally disturbed by the remains of the photographic process. Whether S Street Shuffle, Southern Breeze / Tenchi Gijyo (1992), Finish Dying / Shura No Tani (1994) or Durasia /Duras No Ryodo (1998), there is a sense of a journey – one that gathers many interesting and disparate elements along the way. In Southern Breeze, for example, Suzuki includes Polaroids of old erotic photos with snippets of time-stamped blurred color images cut by typographic abstractions. There is a sense that all his worlds are now unified: combined in a complex whole are all the fluid parts that include the husband/father, commercial sign painter, traveler, photographer, bookmaker and teacher. Like his last book, Durasia, which filters a vision of Asia through a literary construct based on the writings of Marguerite Duras, Suzuki is continually exploring, excavating and layering that which he finds around him – and then through his books he generously shares it all.
In 2010, the National Museum of Modern Art Tokyo mounted a Suzuki retrospective entitled Suzuki Kiyoshi: Hundred Steps and Thousand Stories. And once again Machiel Botman was associated with the development of the exhibition—this time through a very insightful catalogue essay, which champions Suzuki as “one of the best-kept secrets in Japanese photography.”  Focusing on the photobooks and the design process revealed in his book dummies, both the museum catalogue and Botman’s essay reinforce Suzuki’s distinctive position as a photographer who divulges his dream-like vision through a non-linear and surreal narrativity that is composed from a pastiche of seemingly disparate parts. Again exploring Suzuki’s visual sensibility through a chronology based on his books, this retrospective catalogue is unique for its scale and design. Similar to a hardcover novel, the book is not what one expects for a museum catalogue. Rather, it feels like a diary full of mysteries and secrets. Suzuki would have liked this small volume and the way it suggests a sense of time unfolding. I can easily envision him carrying it around as a book dummy, just waiting for the right moment to share it with his friends at the local cake shop.

4 thoughts on “Kiyoshi Suzuki –It’s All About the Photobooks”