On February 6, 2012, it was announced primarily through blogs, Facebook and Tumblr that Japanese photographer Yasuhiro Ishimoto died at the age of 90. The only mainstream US news organization to run a story on Ishimoto was CNN via its photography blog. As an important link in the postwar dialogue between Japan and America, Ishimoto was, according to Minor White, “a visual bilinguist” – a photographer who was uniquely positioned due to his birth and education to act as the cultural liaison between two highly distinctive photography cultures. Despite his crucial role as both an advisor to and photographer in numerous exhibitions at the Museum of Modern Art in New York and the Art Institute of Chicago, Ishimoto’s death was largely ignored in the American press and sadly unnoticed by most in the western photographic community. This is a shame because Ishimoto was a remarkably talented photographer whose work merged a western formalist approach, learned under Harry Callahan and Aaron Siskind at the Chicago Institute of Design, with a Japanese attention to subtle beauty. He was a “photographer’s photographer” — a friend who selflessly supported his colleagues in both the east and west as he acted as an aesthetic and cultural translator in an exchange that still continues today. 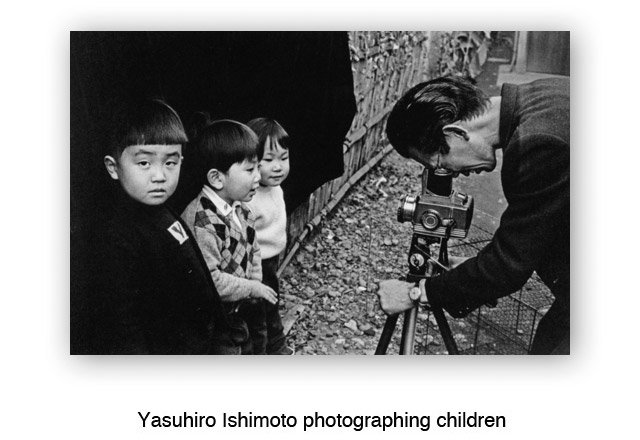 When over a year ago I undertook to explore the Japanese photobook collection at the International Center of Photography Library, the very first book I pulled out of the stacks was Ishimoto’s Someday, Somewhere / Aru Hi, Aru Tokoro (1958). The copy that I held in my hands that day was not a pristine edition that would be found in a photobook collector’s bookshelf. It was a well-worn book whose pages had been repeatedly turned and scrutinized over years by ICP staff members, students and teachers. It simultaneously spoke to Ishimoto’s role as a “photographer’s photographer” and the mission of the ICP Library as a resource for “information and inspiration to anyone interested in the medium [of photography].” The last time I had held this book was at a bookseller’s tiny shop in Osaka, Japan. To see it in New York and so readily available was a nice affirmation that, despite diminished visibility in recent years, students, teachers and scholars still regularly sought out his work. 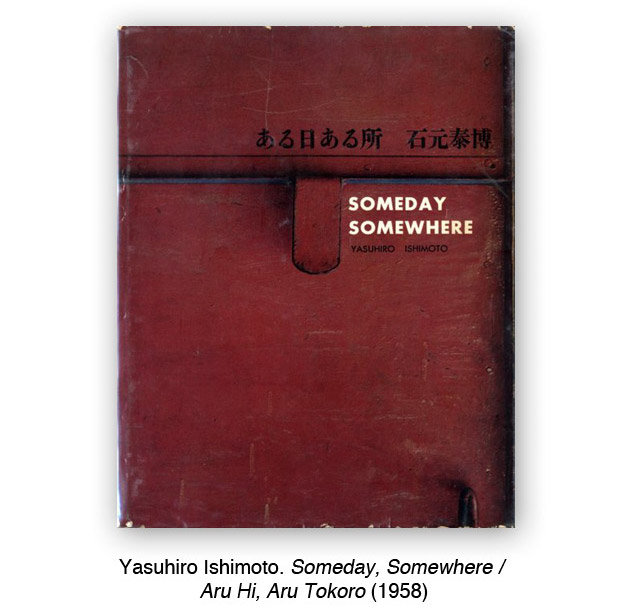 Ishimoto’s life continually moved back and forth between the U.S. and Japan. (A February 2012 post by Richard Pare in the blog La Lettre de la Photographie provides a wonderful and detailed biographical overview.) Born in San Francisco in 1921, while his father was employed in the U.S., Ishimoto returned to Japan in 1924 and spent the rest of his childhood in the Kochi Prefecture on the island of Shikoku. In 1939 his family sent him back to the U.S. to study agriculture in California. Two years later, America entered WWII and Ishimoto was relocated to the Amache Internment camp in Colorado, where he first developed an interest in photography. Upon his release, he enrolled in Northwestern University’s School of Architecture, but quickly realized that his central focus was photography, not architecture. Ishimoto transferred to the Chicago Institute of Design (New Bauhaus), which was led by Laszlo Moholy-Nagy. Advocating a new photography of “seeing while moving,” Moholy-Nagy’s curriculum emphasized the formal aspects of the pictorial space and had a profound influence on Ishimoto’s distinctive east-west aesthetic that reinterpreted traditional Japanese culture through the lens of modernism. 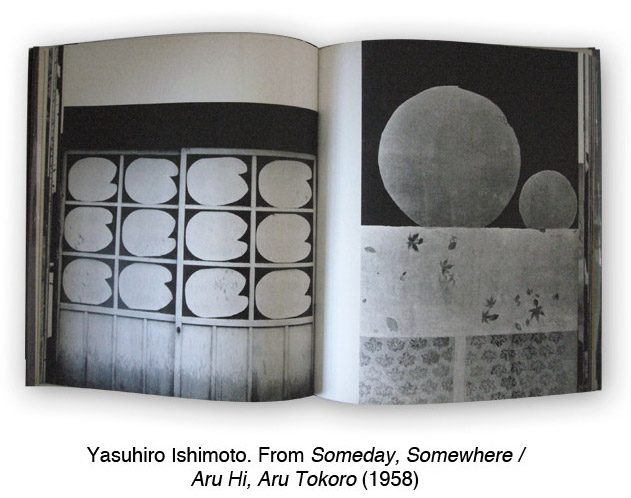 It is this visual sensibility that unifies the seemingly diverse subjects in Ishimoto photography, a range which includes: architecturally focused images of an early 17th century imperial villa in Katsura: Tradition and Creation in Japanese Architecture (1960); identity as explored in the provocatively posed precocious Lolitas and the urban scenes of African Americans in his Chicago, Chicago (1969); graphic and textural studies of signage, defaced facades and nature in his Someday, Somewhere / Aru Hi, Aru Tokoro  (1958); and a confrontation of the transitory in the formal abstractions and blurred Tokyo street scenes of Moment / Toki (2004). Ishimoto’s ability to take both eastern and western subjects and recontexualize them through his unique bilingual aesthetic vision, made him the perfect Japan-America photography ambassador-at-large.

While still a student at the Institute of Design in the early 1950s, Ishimoto’s teacher Harry Callahan introduced his work to The Museum of Modern Art photography curator Edward Steichen, who would exhibit it in the seminal 1955 Family of Man group show and a later solo show in 1961. Impressed by Ishimoto’s ability to easily navigate both the Japanese and American photographic communities, Steichen asked the young photographer after his return to Japan in 1953 to host the museum’s architectural curator Arthur Drexel, in addition to gathering Japanese submissions for the Family of Man show. More than 20 years later in 1974, MoMA’s John Szarkowski and his Japanese co-curator Shoji Yamagishi would include Ishimoto’s work and acknowledge his help “as a selfless liaison with the other [Japanese] photographers and, as a translator who [understood] the photographer’s special language” in the museum’s New Japanese Photography exhibition catalog. In his role as a photographic bilinguist, Ishimoto was also largely responsible for introducing a formal modernism imbued with a distinctly western sense of individuality to a new generation of Japanese photographers through his 1954 solo show in Tokyo, and his widely published architectural images of Katsura. This exposure contributed to the emergence of the more expressive “image school” generation, whose members included Ikko Narahara, Shomei Tomatsu and Eikoh Hosoe. 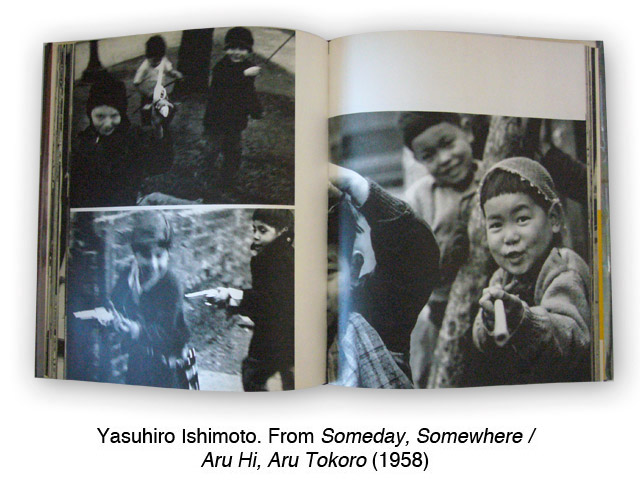 Although he became a naturalized Japanese citizen in 1969, Ishimoto continued to visit the U.S. to work on a variety of photographic projects – many of them resulting in photobooks. Within the ICP Library collection there are 5 Yasuhiro Ishimoto photobooks, published over a period from 1958 to 2009. When viewed together, they show the different sides of Ishimoto’s multi-tiered photographic vision, while also confirming a unity in what on first glance seems to be a disparate body of work. The earliest is Someday, Somewhere / Aru Hi, Aru Tokoro (1958), the well-read book I pulled from the stacks on my first visit to the library. It is organized into three sections and includes images taken in both Chicago and Tokyo. The book, often cited as one of the first important postwar Japanese photobooks, begins with a selection of black-and-white and color offset images that highlight a formal modernist exploration of signage, graffiti and urban abstractions. Towards the end of this section, the prints become rich high contrast gravures, some with vertical gatefolds that showcase a repetition of flat Warhol-like graphic car images. “The Beach” section that follows continues his focus on the formal, as it shows the cropped sandy legs and torsos of beach visitors along with groups of bathers lounging or standing in the abstracted patterns of the sand. “The Beach” gives way to the last section called “The Little Ones,” which allows Ishimoto to shift gears and explore identity and race with photographs of masked children that bring to mind later images by Ralph Eugene Meatyard. Shot in both the U.S. and Japan, Ishimoto’s photos of white, Asian and African American children progress in a formal manner, grouping together like-image of girls with glasses or boys with guns. Often the children stare at the viewer with a knowing edge that suggests the weight of an adult world. 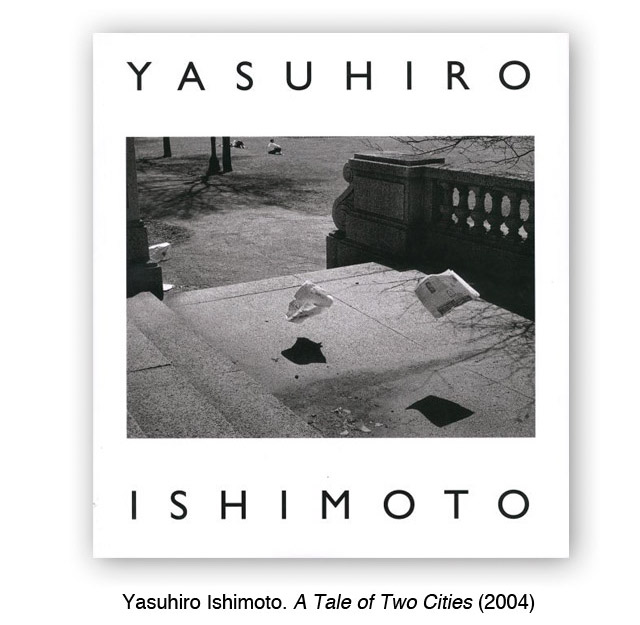 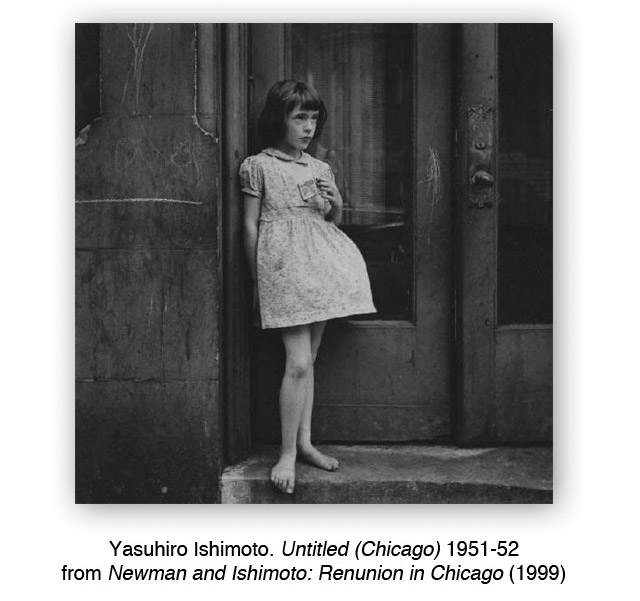 With Ishimoto’s relationship to Chicago as their starting point, 2 later books in the collection present distinctly different historical studies of his work. Yasuhiro Ishimoto: A Tale of Two Cities (1999), the comprehensive catalog for a traveling retrospective exhibition organized by Colin Westerbeck at the Art Institute of Chicago, does a thorough job of covering the different themes found in Ishimoto’s photography up to1999. Although the images included overlap with several of those found in other more narrowly focused Ishimoto books at the library, the context and the wonderful essay are extremely valuable in confirming Ishimoto’s role as a “visual bilingulist.” On the opposite end of the spectrum is the slim Stephen Daiter Gallery (Chicago) catalog Newman & Ishimoto – Reunion in Chicago: Photographs 1949-52 (1999) on the friendship between Ishimoto and the American photographer Marvin E. Newman. The two photographers met while both students at the Chicago Institute of Design and cemented their friendship during long hours spent together in the darkroom of the Fort Dearborn Camera Club. The Daiter Gallery catalog, which presents familiar Chicago street scenes by Ishimoto, is particularly beneficial for elucidating the common thread of an underlying formalism rooted in modernism that shaped both photographers’ work. 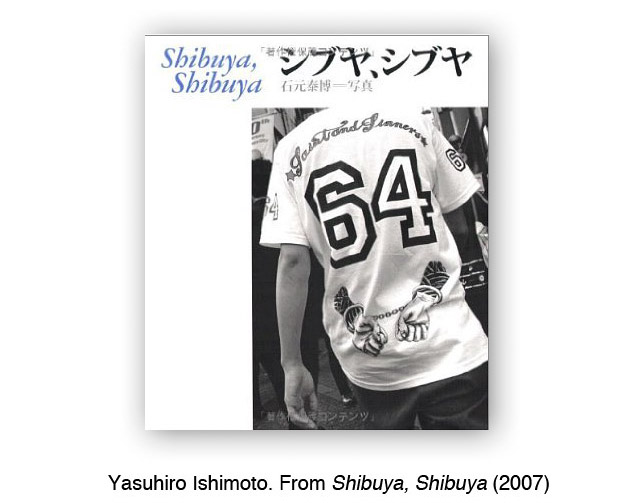 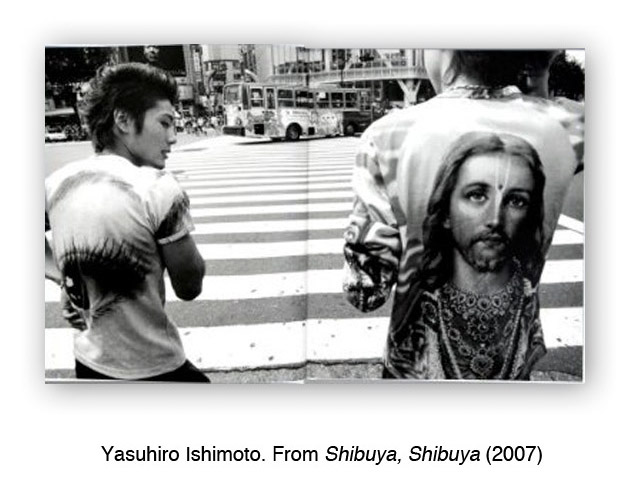 This strong sense of form and composition is always present in Ishimoto’s work and photobooks. Whether the street scenes of his Shibuya, Shibuya (2007) that sequence images in groups based on the patterns and logos worn by fashionable Tokyoites or the abstractions of leaves and clouds interspersed by blurred urbanites in his Moment / Toki (2004), these two later books in the ICP Library are further affirmation of a vision that consistently merges a western modernist education grounded in the teachings of the Bauhaus with an eastern attention to a subtle and often fleeting beauty. Completed when Ishimoto was already in his 80s, Moment /Toki (2004) calmly confronts time, a time that is changing and ultimately fading.  Shibuya, Shibuya (2007) is more rhythmic and patterns its sequences to the beat of the urban environment. Both books speak to Ishimoto’s role as a bilingual guide in a photographic journey that conflates an abstraction centered on form and texture with a social exploration bound to western individuality. The mementos of this bi-directional east-west passage are deceptively quiet images that emerge from a refined visual sensibility that “[writes] haikus with a camera” (Westerbeck). As James N. Wood, the Director and President of The Art Institute of Chicago commented in the foreword to Ishimoto’s retrospective catalog, A Tale of Two Cities, “…Ishimoto’s photographs build a bridge that spans a hemisphere. The magnitude of Ishimoto’s accomplishment was recognized… in his homeland when he was made a ‘Person of Cultural Merit,’ an honor that entails a fellowship for life… Now it is our turn to celebrate Ishimoto’s lifetime achievement…”

6 Responses to Yasuhiro Ishimoto (1921-2012): The “ Visual Bilinguist” in Japanese and American Postwar Photography