The brown boxes that arrive on my doormat usually seem quite ordinary and non-descript to my neighbors and mail carrier — standard-issue parcel posts that shrewdly hide incredible treasures that lay dormant within. As I carefully use my matte knife to cut along the taped seams, my anticipation of the first look is only heightened. This is the secret ritual of a confirmed book addict. If the box happens to be from Japan (and in my case, it usually is), then I know that I will soon be holding an object that is not just a simple collection of photographs, but rather an expertly conceived tiny universe — one that is carefully considered and executed with design, image sequencing and the text to image relationship in perfect balance (or imbalance). I will catch a whiff of the slightly musty smell of an old book, acknowledge small traces of foxing and sunning, and most importantly, enjoy the “objectness” of the book as I remove it from its protective wrapping. This objectness makes the photobook the antithesis and antidote to the digital overload of my daily existence. This objectness asks to be touched, handled, and admired for its sequencing and design. This is the objectness that is nurtured in the amicable collision of a photographer and designer joining forces.

And, this objectness is what sets photobooks apart from the small paperback novels that are now easily adapted to the Kindle and Nook. It is the tangible and the tactile that give the photobook its elevated status as an object to hold (and behold). In postwar Japanese photobooks, this objectness, with its highly attuned attention to every design, image and typographic detail, is the result of a well-regarded collaborative process between photographer and designer. During the 1960s, with the emergence of a distinctive Japanese visual style in design, theater, photography and film, collaborations with inventive designers such as Kohei Sugiura flourished. In both Martin Parr and Gerry Badger’s The Photobook: A History (Vol. I) and Ryuchi Kaneko and Ivan Vartanian’s Japanese Photobooks of the 1960s and ‘70s, significant space is allocated to discussions on the important role of the photographer / designer collaboration. 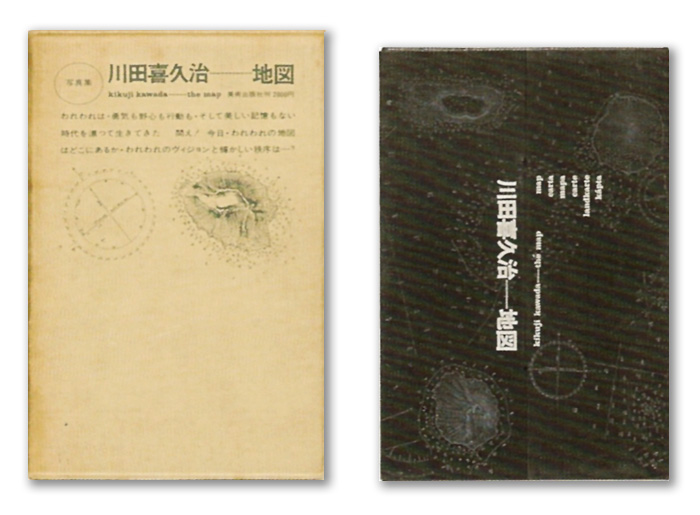 Japan has and continues to be a print culture. Whether the famed woodcuts of the 18th/19th century or the current deluge of manga that has kids all over the world consuming books like candy, Japan has a rich history of the printed page. Despite a smart phone centric digital culture, Japan still values the tangible and physicality of the book — with contemporary Japanese photographers continuing to see the book as one of the primary vehicles for presenting their work.  For Japanese photographers, a book is an entity that must have that “considered” balance of all its elements – one that achieves a “rightness” of design that is appropriate to a book’s concept (Parr and Badger 269). During the Provoke Era (late 1960s – ‘70s), many of Sugiura’s designs were responsible for creating this “rightness” as they simultaneously challenged previous notions of photography and the intrinsic nature of what constituted a book. Whether an image placement that pushed the boundaries of the page in a frenzy of movement or covers imbedded with silver discs, books designed by Sugiura are part of what makes touching, reading and looking at a Japanese photobook so special. Fortunately, the International Center of Photography Library has several strong examples of these seminal collaborations in its collection, which affords the opportunity for an in-depth view of all the elements that contribute to the unique objectness of the Japanese photobook.

An early example of Japanese photobook experimentation in which “design meets photography meets text” on the highest level can be seen in Vivo group member Kikuji Kawada’s Chizu / The Map (1965, reprint 2005). Designed by Kohei Sugirua, Chizu is simultaneously a documentary and a multi-tiered conceptual object that takes the subject of the Hiroshima bombing and Japan’s complex relationship with the United States beyond a simple recounting of events. Packaged in a cardboard slipcase and interior foldout black wrapper inscribed with phrases related to the bombing, Sugiura’s design perfectly marries all the elements of the printed page with the Japanese tradition of package design. The cover image on the jacket shows a close-up shot of a flame with a typographic overlay of a poem. Within are gritty high contrast gravures on gate-folded full-bleed pages, which require the reader/viewer to peel away layers in a slow, deliberate process of discovery that reveals fragmentary views of the Hiroshima blast and American postwar “occupation” juxtaposed with abstracted close-ups. The overall visual sensation is visceral – merging the archival, scientific and emotional into an intricate portrayal of a historical event.

Jun Morinaga’s Kawa, Ruiei / River: Its Shadow of Shadows (1978) is another brilliant example of Sugiura’s fine-tuned attention to the “rightness” of the photobook object. Again, through the use of gate-folded pages, Sugiura’s design purposely slows down the reader to give the book the contemplative focus necessary for Morinaga’s brooding images of the dark depths within Tokyo’s rivers from the early ‘60s. Rather than images of translucent light inflected waters, Morinaga’s water is muddy, intense and foreboding. Bits of surface debris and rotting garbage are framed close-up, as air bubbles take on an abstract patterning. As Kaneko and Vartanian point out in their text (220), River: Its Shadow of Shadows is important not only for its design, but for the support it received from its highly respected publisher Kazuhiko Motomura, who is also responsible for the publication of Robert Frank’s The Lines of My Hand (1972) and Flower Is (1987). Morinaga met Motomura through the American photographer W. Eugene Smith, who Morinaga had worked for as an assistant during the 1970s. Smith also wrote the preface to River: Its Shadow of Shadows.


Touching, handling and reading a book designed by Kohei Sugiura is a distinctive experience that delivers the sublime pleasure associated with “objectness.” One immediately senses that the object within one’s hands is not just a simple book, but an art object with a completeness that successfully achieves that precarious (and often missed) synergy between design and concept. With the reader’s experience in mind, Sugirua is continuously concerned with how the merger of text and image will offer an unexpected and new sensation. In a 2006 interview, he stated, “The most important thing is the ability to be surprised. That means to be very sensitive to something new and unusual, and then the surprise comes, the five senses become one. Some big surprise can make you jump. The breath and heartbeat, hearing and singing…The whole body becomes one, and then the jumping…Being surprised is very important for human beings” (Conversation with Kohei Sugiura: Keep the Ability to Be Surprised)

Other Photobooks Designed by Kohei Sugiura:

Books Mentioned in the ICP Library

Further Reading on Kohei Sugiura and other Japanese Photobook designers can be found in the following two books:

13 thoughts on “Kohei Sugiura: The Japanese Photobook as Object”