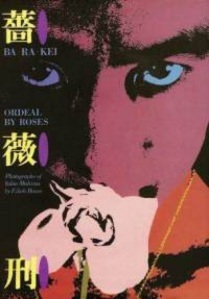 This second in a series of blog posts to explore Japanese photobooks and periodicals in the International Center of Photography’s library and permanent collection focuses on reprints and facsimile of well-known 1960s and ‘70s Provoke Era photobooks. During this period in Japan, a small, yet highly influential community of photographers in collaboration with avant-garde graphic designers such as Kohei Sugiura and Tadanori Yokoo produced some of the most dramatically experimental and elaborately designed photobooks. As one of the few means of “exhibiting” and disseminating their work, the photobook became an object of intense focus as it played an essential role in the dialogue that Japanese photographers had within Japan and abroad. With limited gallery opportunities, many photographers banded together in constantly changing cooperative groups to seek out exhibition opportunities and publish provocative journals that addressed both political and aesthetic issues that tested Japanese laws on sexual decency and social etiquette. In the last 25 years, a number of these seminal and now rare photobooks have been reprinted to allow their dissemination to a broader audience. The ICP is fortunate to have many of these Provoke Era facsimiles and reprints in its library. 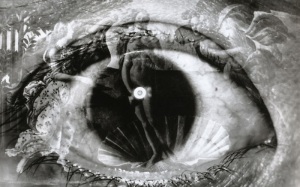 Noteworthy examples include the highly influential books produced by the Vivo group, among them: Shomei Tomatsu‘s Nagasaki 11:02 (1966/1995), which reveals a strong influence by William Klein and Ed Van der Elsken, while also showing signs of a rawness which is more typical of an evolving Japanese sensibility. Also of interest by Vivo members are: Eikoh Hosoe’s Otoko to Onna / Man and Woman (1961/2006 Nadiff facsimile), Barakei / Ordeal by Roses: Photographs of Yukio Mishima (1963/1985) with images of famed writer Yukio Mishima, Kamaitachi (1969/2005) with a preface by Shuzo Takiguchi and poem by Toyoichiro Miyoshi; and Kikuji Kawada’s Chizu / The Map (1965/2005).

In 1968, Takuma Nakahira (a writer, who turned to photography) in collaboration with writers/poets Koji Taki and Takahiko Okada, and photographers Yutaka Takanashi and Daido Moriyama produced the groundbreaking journal Provoke. It would only last 2 years and 4 issues, but would leave an indelible mark, far exceeding its short life. Favoring the grittier underbelly of Japanese culture, Moriyama, Takanashi and Nakahira created images that verged on abstraction as they revealed the yakuza (gangsters), transvestites and prostitutes of the seamier side of Japanese life in areas such as Shinjuku’s Kibukicho. Seminal Provoke photobooks represented by later reprints in the ICP Library collection are: Takuma Nakahira’s For a Language to Come (1970/2010); Daido Moriyama’s Bye Bye Photography (1972/2006); and Yutaka Takanashi’s Toshi-e / Towards the City (1974/2010). Also of interest is non-Provoke member Katsumi Watanabe’s Gangs of Kabukicho (2006), a later release based on his 1973 images of the Kabukicho red light district in Tokyo.