Posted on October 26, 2010 by gmaxwellmiller 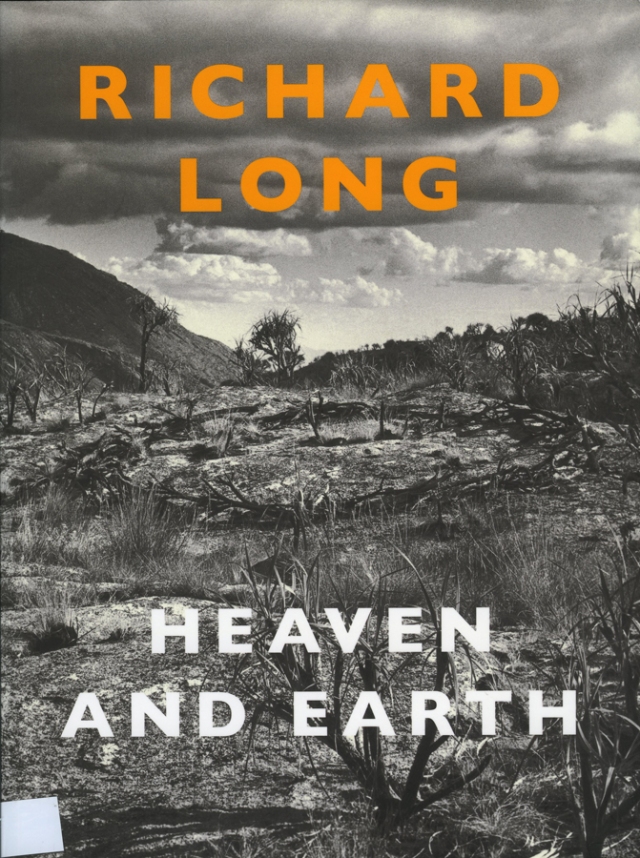 Heaven and Earth spoke to me as I slid it off the shelf.  Heavy, it sits in your hands as quite large.   Richard Long did a lot of walking and piling of stones, for those who are unfamiliar to his art works.  He photographs the interpretation of his experience of a planned journey, and titles them with simple, affective, and descriptive title, such as “A thousand stones added to a footpath cairn, England, 1974”.  He has an attention to his surroundings which I personally can relate to, in that his time spent there is obvious, he has made his evidence using the photograph.  His interventions, though, we know are fleeting, have employed the photograph as their witness.

Some of his work just exists in text, or combinations of image and text, that in the book sound like Haikus in their simplicity.  Each sentence conjures up a vision of dreamlike haziness.  The fleeting nature is similar to his actions, which we know at some point will disappear, blending into an ever changing landscape.  I think this purposeful wandering is admirable, in that his determination to go as far as he does for what could be considered so little as “just a photograph.” Yet his photographs are so considered, I start to see them as part of the journey and not its only goal.  In his title, he evokes the connection to earth being heaven one and the same.  Since I do not believe in the traditional “Heaven,” I am apt to believe this sentiment more and more.

One Thing Leads to Another, Everything is Connected, 2007

Evidence is seen in many pieces, a line he has created by walking, stones in a row or circle, but others are just a simple but considered landscape, which when compared to his other work, tells me more about his experience rather than the image itself.  The image evokes memory, and even smells of what I would expect to smell in a particular place.

One thing confuses me, its that, why does he feel the need to share this experience via photographs and poems?  Seeing that I understand his experience is so important and possibly even a spiritual undertaking for him, where does this evidence he creates come into play?  What I suspect is that the role of authorship here is to impart a shared experience of his journey.  It is also a “testament to his presence” as stated by Nicholas Serota, in the book.  His work is obviously performative, and sometimes he just tells us what he has done.  This imparting, that the journey was important, almost so as enough that he would describe it merely in a few sentences, because no other words could do it justice.  He records the ephemeral.  His act, is what is really important, and we think about the act, sometimes more so than the image.

His acts are so firmly rooted in ritual, and they speak of his connection to a higher existence.  He doesn’t attempt, through his images to recreate a specific tribal ceremony or anything like that.  Its that he doesn’t need to which makes me feel like these actions are instinctual.